...it is also a day when UNAREC 30th Alliance Anniversary workcamp STARTS! 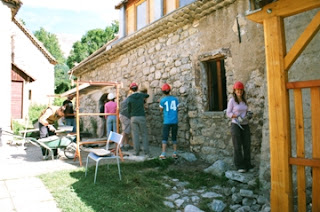 Since summer 2002, workcamps have begun to protect the Montaigu-le-Blin’s castle – which has been listed as a Historical Monument. Thanks to your involvement, we would like to stop the damages caused by bad weather and vegetation, and eventually, give back to the castle the important part it used to play (openings to the public, guided tours, heritage linked activities…).
Volunteers will focus on restoring a part of the lower courtyard : repointing, cutting back into the old joints, coloring -at human height (no scaffolding) -on the entry wall; building again the wall, repointing, lime coating - on a scaffold - on the surrounding wall; valorizing a staircase (clearing the steps, clearing off the vegetation). you will also participate to painting the castle’s gate and start the restoration of a wooden house used for welcoming public.
Village Montaigu-le-Blin - see on the map.


This project is organized by: