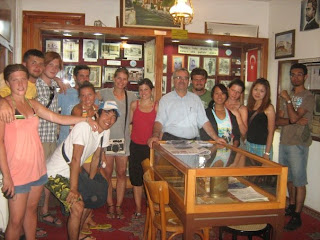 The camp is situated in the suburban part of Pereyaslav-Khmelnytskyy. This town has rich history and a lot of places to see. It is situated on the banks of one of the most beautiful rivers in Ukraine - the Dnieper, 100 km to the south-east of Kyiv – the capital of Ukraine. Pereyaslav-Khmelnystskyy is one of the most important place in Ukrainian history.  Pereyaslav-Khmelnytskyy has existed since the 10th century. It was a border stronghold of the Kievan Rus state but was overrun by Tatars in 1239. The town began to recover in the 16th century and emerged as a site of Ukrainian Cossack culture. In 1654, Bohdan Khmelnytskyi and his Cossacks met at Pereyaslav to agree that Ukraine, for protection against Poland, become a protectorate of Russia – breakdown in the Ukrainian history.

Open-air Museum of Folk Architecture is integral part of national Ukrainian heritage and is protected by special law. We continue the 15 year project, repairing the historical objects and cultural monuments, participating in the work on the territory of the historic and cultural recreation area in Pereyaslav-Khmelnytskyy. Volunteers will help the workers of the Museum of Ukrainian Folk Architecture through different activities to restore the museum exhibits and to clean the territory of the museum.

Project is organized by:

www.alternative-v.com.ua
Posted by Alliance of European Voluntary Service Organisations at 8:16 AM